The SPADE High Performance Anchor has topped independent tests for over 20 years and revolutionised anchoring as we know it today.   Here is a selection of the articles featuring the SPADE anchor over the past 20 Years.

Thanks to its design and to its ballasted tip, the Spade digs in every single time until full disappearing completely.

The Spade digs immediately and has been the only one to reach 2 tons of traction in less than 1 minute (constant holding). Above 2.1 Tons, we had to stop the test to prevent the cleats ripping out of the deck !!! “

Spade Galvanised Steel S80 15Kgs : “This model has been tested in the worst conditions by the crew onboard the RM1200 during its long Mediterranean cruise.

The Spade dragged only once, in Tunisia…because it landed on top of an agricultural tarpaulin which was directly below the foredeck.

Its high price is justified by a quite elaborate manufacturing (bevelled hollow shank) designed to facilitate penetration by loading the tip.

The Spade also exists in stainless steel, but the added value of this material is mainly aesthetic.

Spade Alu A60 12lbs kgs : “The geometry of this model in aluminium is strictly identical to the one of models in galvanised steel and stainless steel.

Its behaviour and holding power are also the same, thanks to the ballasted tip which positions the blade correctly and guarantees an immediate set.

The shank has since been strengthened and problems were noticed “.

“A Stripped Sun Odyssey 45.2”… “It’s worth noting that the SPADE anchor with a ballasted tip offers a guarantee of serenity in the windy moorings of the Caribbean.”

ENGLAND – Practical Boat Owner N° 427 – July 2002
“Best Performer : THE SPADE !”
“The SPADE was the best performer for a given weight. It was roll stable and held extremely well. It was also the most deeply buried anchor.” 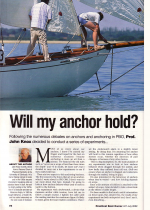 ENGLAND – Practical Boat Owner N° 428 – August 2002
Overall Performance  5 STARS
“The overall winner is the SPADE because it never rolled out and also gave the best hold, with very little change when the scope was decreased.” 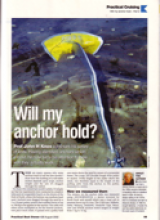 Aluminium SPADE test : “An excellent holding power on two types of grounds. The holding power is huge and when it trips, this anchor does so slowly and consistently”

SPADE anchor is voted “coup de coeur”. “its efficiency is such that its popularity should spread amongst deep-sea cruisers.”

Neptune Moteur and Bateaux published a comparative study on the most common anchors on the market, in realistic mooring conditions.

Their results : for identical design and surface area the anchor’s weight has nearly no influence on the holding results (as demonstrated by the SPADE anchor).

“It’s not my job to research all the new products on the marine market, or to promote them. However, when I come across something really valuable, I feel I really must let the world know”.

It is the SPADE anchor, a very recent innovation designed by a French amateur sailor Alain POIRAUD, who wanted to combine the benefits of several kinds of anchors in one.

The Spade sets very quickly and holds exceptionally well – in fact, so well at times that the electric windlass could not break it out and we had to motor it out. We used the recommended 44lbs version.

The Spade has very good reviews in publications all over the world and performed in an excellent manner in numerous tests.  I AM IMPRESSED… Andrew BRAY – Chief Editor of YACHTING WORLD

“I was tired of anchoring problems, and I chose the new SPADE anchor because it has the optimal tip-weight, the ideal contact geometry for rapid penetration, and an effective surface area of concave profile which will guarantee it the highest holding resistance. In short, the designer got it all right ! Three months of navigation later, I have found it to be a very good choice.”

Top 10 Products for 2001 Making its second appearance in the Gear-of-the-year derby, the aluminium SPADE anchor has been a stand-out in Practical Sailor’s series of anchors tests.

Anchoring is a complicated undertaking made even trickier by widely varying conditions. The multiple-test approach and the SPADE’s consistent showing make it the first product to make two appearances on Gear-of-the-Year lists.

It costs a great deal of money, but in the PS tests it at performed at or near the top of the heap in all conditions. It sets well, despite its light weight, and stows and handles easily.

“To order and receive a SPADE anchor has been very easy. We faxed our order and received it directly at home within the delivery timing. (…) During the test on two boats in full wind, not only did the Spade hold the first one but also the second one… It is an impressive performance !”

Chuck Hawley, an expert with regards to anchors, wrote the following : Until recently, I had not tested the SPADE, but I was curious due to the numerous comments made my amateur sailor friends (…) I finally was able to test the aluminium and steel versions (…). Both anchors have set at once and held way over 1000 lbs during each of our tests.

After pulling each sample, we released the mooring line and pulled again in a direction of about 60° from the original direction, as if the boat had yawed… Both anchors have held above 1000 lbs. The anchor never dragged. My conclusion : very promising…

SPADE anchor is ranked “PRODUCT OF THE YEAR”.

“In the sand, the SPADE was ranked at the top of 15 anchors and brought shame on the others.

Each time the anchor was thrown in the water, it has set in at once and has slowly brought the dynamometer almost immediately to its limit.

It seems that its designer has achieved a remarkable progress”.

On this website we use first or third-party tools that store small files (cookie) on your device. Cookies are normally used to allow the site to run properly (technical cookies), to generate navigation usage reports (statistics cookies) and to suitable advertise our services/products (profiling cookies). We can directly use technical cookies, but you have the right to choose whether or not to enable statistical and profiling cookies. Enabling these cookies, you help us to offer you a better experience.